Pt. 2 – God’s Word and the Unpopular Notion of “One True Church”

Recall in part one that we looked at the characteristics of Biblical prophets and that God has once again called them in our time.

As a young boy, Joseph Smith, the founder and first prophet of the Church of Jesus Christ of Latter-day Saints, was confused by the various dominations of his day, why they differed, and which he should join.

Joseph Smith recalled later that he “must join none of them, for they were all wrong; and the Personage who addressed me said that all their creeds were an abomination in his sight; that those professors were all corrupt” (Joseph Smith History 1:19). This visitation from God was an answer Joseph Smith received after reading from the Book of James 1:5. It counseled one such as him, “If any of you lack wisdom, let him ask of God, that giveth to all men liberally, and upbraideth not; and it shall be given him.” Trusting in God’s word, Joseph Smith knelt in a grove of trees near his home and did just so.

To put the LDS claim and its significance into perspective, think back to the Puritan era (a time when monarchs claimed the Divine Right of Kings) and the New World colonization by a variety of Protestant peoples from Western Europe. Expelled from the Massachusetts Bay Colony under John Winthrop, Roger Williams, the founder of Rhode Island and the First Baptist Church in America, made the following observation concerning the faith systems of his day:

“There is no regularly constituted church of Christ on earth, nor any person qualified to administer any church ordinances; nor can there be until new apostles are sent by the Great Head of the Church for whose coming I am seeking” (Bryan, 502).

Winthrop considered separatists and free-thinkers like Williams, dangerous to his colony, a colony set up to be an example of pure Christianity to the corrupt Church of England.  The Church of England differed little from the Catholic Church, separating primarily because King Henry VIII wanted a divorce, which the Pope denied.  In word, deed, and practice, the Churches are very similar, but the Church of England (Anglican Church) is Protestant in nature and is more of a reform rather than a complete separation. During the times of Williams and Winthrop, the Bible existed in its English form, yet a thorough understanding and rediscovery of the totality of its contents were still in their infancy. In addition, Protestant reformers questioned and rejected the authority of the pope. But where and how did these reformers received their own authority goes unquestioned by most, with the exception of Roger Williams, Joseph Smith, and the Latter-day Saints, and perhaps a few others?

Ever since the Puritan era, religion has continued to grow and divide in an atmosphere of free expression in which most believers have been more than satisfied with self-proclaimed, often charismatic individuals preaching salvation through grace and the Bible as their authority. From this pattern, thousands of Protestant, Evangelical, and non-denominational churches emerged, all of which maintain some disagreements, but will quickly remind you that they agree on the core ideas of “orthodox” Christianity. Why then is division still a problem, and why is it acceptable when the New Testament warns against division? Is it consistent with the God of the Bible to give authority to so many in this way? More on this question will be answered in part 3.

Many who followed in the footsteps of the separatist Williams, specifically self-proclaimed pastors, and evangelist, continued to discover more and more about the Bible than had previously been understood or emphasized to the taste of believers. In what would be called the “Second Great Awakening, evidence of this increased learning is manifest in the many issues that separated one from another as reformers argued over various doctrines such as predestination, the gift of tongues, healing, spiritual gifts, end-times prophecy, baptism, and the extremes of rattlesnake handlers, which highlighted a hyper-focused emphasis on any one of these topics. An excellent book on these particulars is Paul Conkin’s American Originals: Homemade Varieties of Christianity.

Such confusion resulted in a surge of uniquely American-made denominations to what some estimate to be in the tens of thousands, to name a few including those that previously broke away while in Europe: the Anglican Church, Presbyterian, Evangelical, Methodist, Lutheran, Campbellites, Seventh Day Adventist, Pentecostal, Unitarians, Baptist, Church of Christ, Jehovah’s Witnesses, Christians Science, and other non-denominational or megachurches. This list barely scratches the surface as churches continue to form after this manner.

Protestant historians have described the environment in which these many reforms materialized as a time when “Countless American Christians…rushed to discover the pattern of the primitive church, to rebuild that church in the new American nation, and thereby to hasten the millennial age” (Allen, 92). The previous lack of knowledge, or ignorance of the Biblical inner-workings, stemmed from a period lasting longer than a millennium as the ecclesiastical and political authorities feared that the common man might possess the Bible, or even hear sermons preached in their own language.  Whether or not these reformers correctly applied and interpreted the word of God, only to result in the creation of these various new sects of Christianity, is significant to understand the bigger picture of religion today. One thing is clear from this history and that is that there was a sense of urgency to return to a pure form of Christianity found in the New Testament and many scrambled to recreate this society from their own research and emphasis.

Recognizing that the New Testament Church ended in the first century with the death of the apostles and the events that followed just up to the founding of the Church of Jesus Christ of Latter-day Saints in 1830 are vital to comprehending the condition of Christianity at the time God prepared to call another prophet. The New Testament plainly describes the need for apostles and prophets and the role they play in keeping the faith united.

This section explored that Christianity has tried to rediscover itself, and in the midst of various attempts God has once again continued his pattern through the prophetic calling of Joseph Smith. The next section, I hope, will encourage Bible believers to take a step back and review the claim of their brand of Christianity and consider the claim of the LDS Church and how it may add to their spiritual growth and experience. 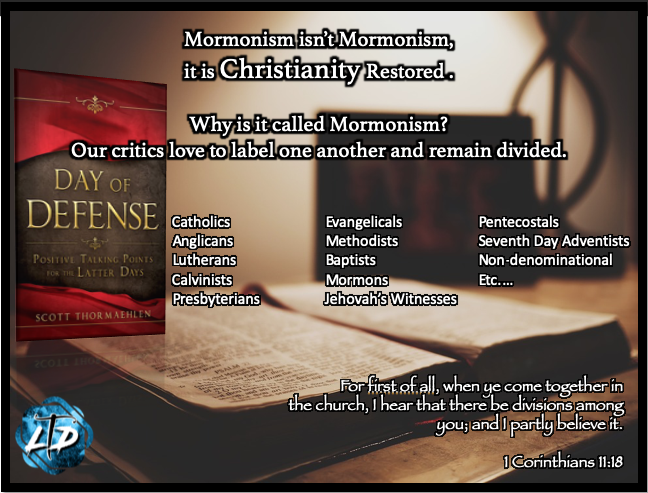