The Pope – A man of God, or just another man?

This week’s historic visit from Pope Francis to the U.S., which included a speech before Congress and a visit to the White House, begs a few questions. Who is the Pope to the American people? To the world? To many, the pope is just another man. What are we to take from this man’s appearance exhorting Americans to follow the Golden Rule, to care for the poor, or to manage our resources? Many Christians are fully aware of these issues. But why is the Pope speaking to the government? I thought liberals removed prayer, Nativity scenes, and the Ten Commandments from public life? Why the sudden interest?

If you can answer those questions, let’s hear it. However, I think a few more important questions are in order. In 2014, Yahoo News’ Candida Moss proposed a few foundational questions regarding the pope, asking “what if Peter never went to Rome and was never the first Bishop of Rome? What if the idea of a Supreme Pontiff emerged hundreds of years after Peter’s death?”  Summarizing Fordham University theology professor and author George Demacopoulos, The Invention of Peter, Moss further stated that “the very idea of Peter as the Supreme Pontiff and leader of a worldwide church is a much later idea that took its rise in the ecclesial politics of the fifth century.”

This idea of a Peter-to-Pope transition is discussed in chapter 3 of ‘Day of Defense‘ and is a question of historical and biblical significance. If popes are a late creation, that should transform our view of Christianity.

The questions raised in Moss’ review are important for a few reasons:

-First, during the first century, the apostles were killed.

-Second, the Catholic Church never had the authority, to begin with (Mathew 10:1, the first appearance of New Testament “power,” ceased with the extinction of the office of apostles).  If Catholic popes were handed this authority, why did the letters from the apostles cease and what documentation exists that accounted for this transfer of power?

-Third, we might ask if the work of the Protestant Reformation led believers back to the legitimate and authorized Church through their own efforts?  For more on this question, read here.

-Fourth, Christianity remains divided when the New Testament warns against division, and God and his apostles plead for unity.

While the Pope and all Catholics deserve a voice and respect to their religious convictions, the rest of us will kindly listen but continue on much as we have since our forefathers broke away from the Catholic Church many centuries ago. The thought of our Republic’s moral and political degradation might be enough to make any student of the Enlightenment cringe to witness our leaders entertain the once-archenemy to reason and liberty – the papacy. Since the Reformation, Christians have divided amongst one another through their interpretations and formulated their own traditions. Have we accomplished so little that we need a lecture from the Pope?

The great lie is that Mormon prophets are strictly reserved for the Mormon people. That is no more true than the authority and message Peter possessed in the first century was reserved for the Jews only.

Perhaps, lost on many Americans, is the idea that God once again raised up prophets and apostles, as described in the Bible, with a peculiar group of Americans in order to rein in confusion and to establish a worldwide community of believers. An addendum to the question at hand, are Protestant and other mainstream leaders men of God, or just ordinary men?

Are believers today, those who remain in the reform traditions passed down to them (Calvinist, Lutheran, Methodist), those from the first Great Awakening (Evangelicals), and those from the Second Great Awakening (Seventh Day Adventists, Jehovah’s Witnesses, Pentecostals, Christian Science, Unitarians, Disciples of Christ, Christians, etc.) so steeped in their traditions that they have simply stopped asking questions?

While it is nice to experience the diversity the world has to offer and to welcome dignitaries from all walks of life to speak to us, Christians in America need to consider their place in history, why the Pope is visiting a nation largely composed of non-Catholic Christians, and where the search for the primitive church has left us? America’s patchwork of religious denominations is a huge leap in human tolerance, but it has failed to fulfill God’s exhortation to follow the prophets and to be united as one.

The great lie is that Mormon prophets are strictly reserved for the Mormon people. That is no truer than the authority and message Peter possessed in the first century was reserved for the Jews only. What Christianity needs is a Third Great Awakening, and in that awakening, they will be surprised to find the answers to the questions about the Bible their traditions once so feverishly sought after stopped just short of the truths of the Restoration.

My book Day of Defense ends the book with a chapter on unity and provides the necessary context as to why there are so many religious divisions today.  After reading Day of Defense, author Eric Shuster had this to say: “Day of Defense is a compelling work that will sharpen the intellect of the Latter-day Saint and challenge the misconceptions of the skeptical Christian. Author Scott Thormaehlen provides an important component in unifying the faithful across denominations.”

You can purchase Day of Defense at Amazon.com, iTunes, BarnesAndNoble.com, and Deseret Book.

If this information is helpful to you and you would like to know more, the Church of Jesus Christ of Latter-day Saints has full-time missionaries all over the world and in your area.  To contact them, visit: http://www.mormon.org/missionaries or you can like my Facebook page and converse with me there. 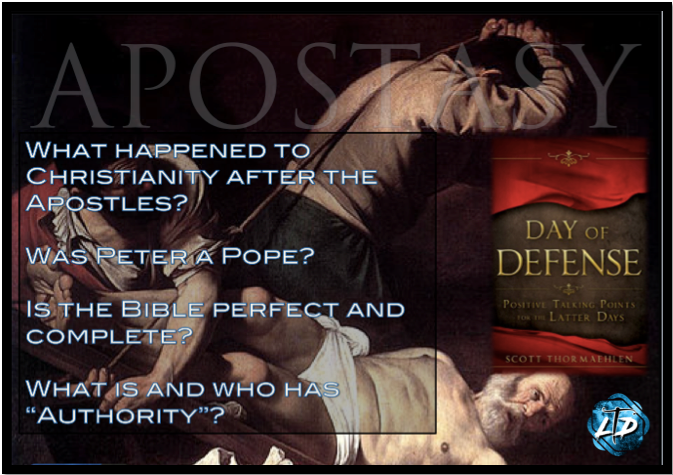