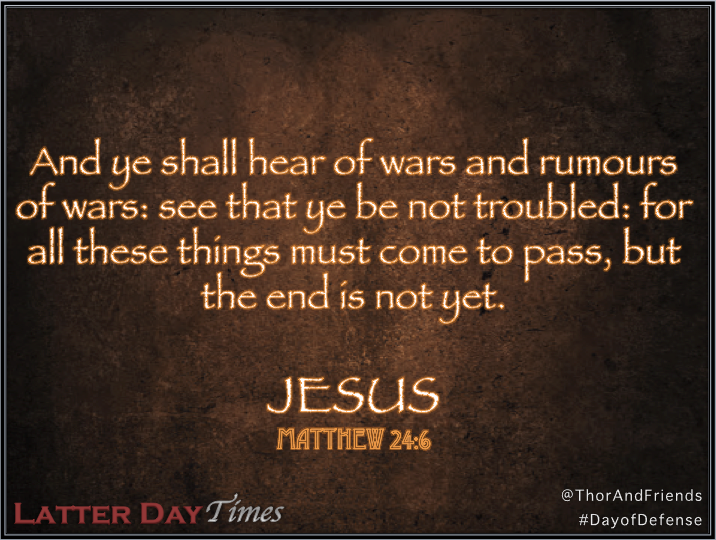 Wars and Rumors of Wars, and the 2016 Road to the White House

How are we as Christians supposed to make sense of the current political climate? The answer might just be in our Bible. While it is important to be involved in the political process, it is more important that we assess the current situation for what it is: a disaster. Before we get to our role as Christians, I want you to consider one thing. How closely have you vetted your particular candidate of choice? How differently will a President Cruz direct the nation’s foreign policy than a President Trump? Until the March 3rd Fox News Republican primary debate, I was beginning to believe that Trump was the least hawkish – and therefore more conservative – of the candidates remaining (maybe he still is?). Then Trump expressed his confidence in Richard Haas, the current president of the Council on Foreign Relations (CFR) for advice on foreign policy. Trump’s choice of advisors begs me to question the possible outcomes of his potential presidency. The CFR has advised top U.S. leaders, businessmen, bankers, lawyers, and many other influential members of our society since the 1920s. In addition to providing politicians with foreign policy advice, the influential “think-tank” promotes globalization and other related advocacy on world affairs and institutions. In foreign affairs, the CFR is the political establishment. Cruz claims to be anti-establishment while the conservative media portrays Trump as the one upsetting things for Washington insiders. Are both candidates playing the American public?

“The problem isn’t that his [Cruz] inner circle is composed of men and women of vast foreign policy experience; the problem is that their experience is in growing government, supporting surveillance, and using American troops as global peacekeepers. As constitutionalists know, each of these endeavors — pursued over and over by Cruz’s chosen advisors — is unconstitutional and not at all consistent with Ted Cruz’s public statements.”

What options do Americans really have if all of the major candidates surround themselves with the same people?

You may recall that Rand Paul was the only candidate in this primary season, in essence, who stated that it is a fool’s errand to try and promote democracy by toppling dictators. Self-government requires values, education, and tolerance developed in the hearts and minds of individuals. The president of the United States cannot give these things to the people of the Middle East. As it is the goal of the CFR to influence universities, bankers, religious and congregational leaders, community and nonprofit leaders, it does so with the intention in order to push its international agenda. The question most American’s are not asking is, “Why is this neo-conservative organization seeking to influence our highest office?” Shouldn’t the President be directing his loyalty, instead, towards consulting and enforcing the United States Constitution? Americans had their chance for constitutionalist candidates in 2008 and 2012 with Ron Paul, and again recently, with his son Rand Paul. You can bet the Paul’s don’t surround themselves with CFR affiliates as do Trump and Cruz.

The United States is currently saddled with a national debt of over $19 trillion, and even if it were possible to spread democracy to all the world, the United States can neither justify nor afford to do so. With Hillary (another CFR loyal), the Donald, or Ted, America is likely to dig itself further into the affairs of the Middle East and continue the trend of excessive debt, lost lives, and increased dependents of the troubled Department of Veterans Affairs. But not to worry, Trump has promised to take care of the Vets.

Knowing that Clinton, Cruz, and Trump all have one thing in common –  the CFR – America should always consider the friends of those who seek our executive branch, what they believe, and why. Who one is surrounded by certainly tells us much more about the candidate than 24/7 media analysis and social media memes can ever hope to accomplish. From the old mantra, “Show me your friends, and I’ll show you your future,” we can conclude that there is little reason to believe that a Trump presidency would differ a whole lot from a Cruz administration.

However, looking ahead and thinking beyond all the political rhetoric, here is where you come in. In Standing for Something: 10 Neglected Virtues that Will Heal Our Hearts and Homes (Times Books, 2000), the late President of the Church of Jesus Christ of Latter-day Saints, Gordon B. Hinckley said:

I have lived long enough to know that many political campaigns, for example, are the same. I have heard again and again the sweet talk that leads to victory but seems never to be realized thereafter. We need moral men and women, people who stand on principle, to be involved in the political process. Otherwise, we abdicate power to those whose designs are almost entirely selfish (Standing for Something, 170). 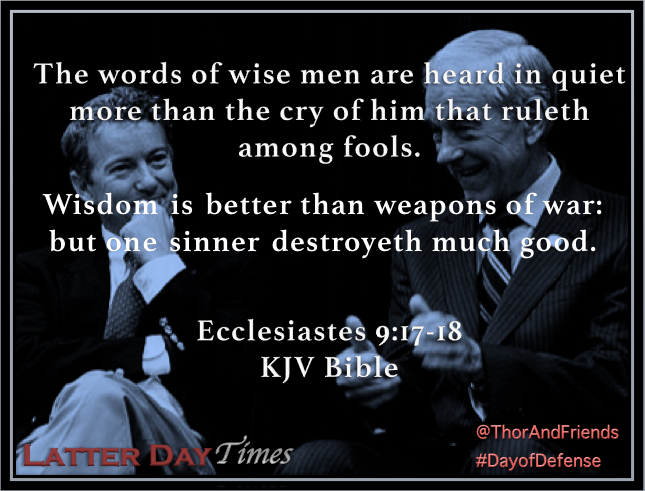 Much like what Gordon B. Hinckley stated regarding voting, the Lord revealed a similar message to Joseph Smith, documented in the Latter-Day Saint scripture:

Wherefore, honest men and wise men should be sought for diligently, and good men and wise men ye should observe to uphold; otherwise whatsoever is less than these cometh of evil (D&C 98: 10).

But fear not, while these troubling times are amongst us, it is written that “all these things must come to pass” (Matthew 24:6). Yet, Christians are not off the hook. We have a great work to accomplish. “This gospel of the kingdom shall be preached in all the world for a witness unto all nations; and then shall the end come” (Matthew 24:14). We must not forget our goal and how these things fit into the bigger picture, as explained by Christ, in regards to the affairs of the world. Elder Boyd K. Packer spoke the following words during the October 1975 General Conference:

The powerful missionary spirit and the vigorous missionary activity in The Church of Jesus Christ of Latter-day Saints becomes a very significant witness that the true gospel and that the authority are possessed here in the Church. We accept the responsibility to preach the gospel to every person on earth. And if the question is asked, “You mean you are out to convert the entire world?” the answer is, “Yes. We will try to reach every living soul.”

Some who measure that challenge quickly say, “Why, that’s impossible! It cannot be done!”

To that we simply say, “Perhaps, but we shall do it anyway.”

Against the insinuation that it cannot be done, we are willing to commit every resource that can be righteously accumulated to this work.

The wisdom of Elder Packer’s words reminds us that our influence as Christians is far greater than we can comprehend. Our knowledge of the Gospel is truly the key to curing society’s ills. The political direction of our country need not go astray but should be guided by the voice of its citizens demanding to be represented by righteous leaders who have our best interest in mind. Plato once said, “The price of apathy towards public affairs is to be ruled by evil men.” We must not stand by, watching the decay of our own society. We must stand up and open our mouths. A Christ-like society is not impossible! It can be done! Although, it most certainly will be impossible, as long as Christians remain divided.

“He that walketh with wise men shall be wise: but a companion of fools shall be destroyed.” Proverbs 13:20