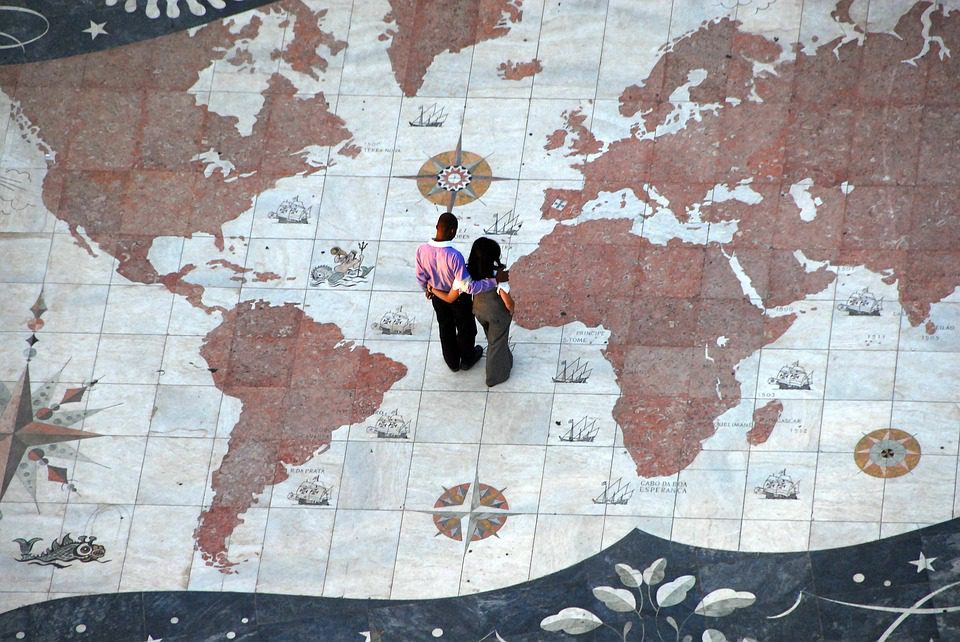 A Tale of Two Interpretations

This is part 6 of a 9-part series on the topic of the Church of Jesus Christ of Latter-day Saints and race relations. See the rest in the category section: https://www.latterdaytimes.com/category/blacks-priesthood/

At a time when most traveled by foot, horse, or buggy, when the telegraph was the newest tool of communication, and with the railroad on the horizon to dominate travel across the new nation, human slavery was an awful reality known across the world. After all, human liberty was a relatively new concept. The transition of people from the ages of kings to private citizens ruling their lives was sometimes a slow and painful process. Shortly after securing our freedom from the British a second time, an increasing number of American citizens debated the future of the enslaved African peoples, slaves revolted against their masters, and the abolition movement began to catch steam.

Even after a bloody civil war and the promise of emancipation, Americans, mostly in the South and in urban areas, would grapple with equal rights and extending liberty to their fellow man. Despite the efforts in the late 1960s that ended Southern Jim Crow laws, well into the 1980s, city centers like Boston waged protests against the federal government’s efforts to desegregate schools. Wrapped up in this context was the birth of the Restoration of Christ’s Church in upstate New York. The “one true church upon the earth” would not go unscathed in this bitter battle between whites and blacks, between republicans and democrats, between the states and the federal government.

Among the various movements in the turbulent cultural and religious wave known as the Second Great Awakening, a new prophet emerged in upstate New York. Joseph Smith, Jr. founded the Church of Jesus Christ of Latter-day Saints, a movement that restored the very church Christ established with his Apostles in first-century Jerusalem. Going forward, we’ll just refer to the Saints and the Church as the Restoration.

The Restoration, although officially founded as a church on April 6, 1830, a series of events came many years before. The first event was the vision of the Father and Son to the then 14-year-old Joseph who simply wanted to know which of the many competing denominations to join. In essence, he was told to never join any of them.

One might think of the Restoration as something that was complete when the Church was officially founded. That is incorrect. Rather, it was a slow and steady theological development that came with questions and answers revealed to the prophet from the Lord. Joseph Smith, Brigham Young, and other successors would inquire of the Lord on biblical topics and an answer may or may not be given.

The purpose of this article is to shed light on a particularly controversial and culturally sensitive issue that Saints are unfortunately still dealing with today, especially from outside criticism. This issue deals with Latter-day Saints of black African descent. It is important in this matter to keep in mind how the Church evolved, rather than seeing it as a community of fixed practices and procedures from the very beginning. The church has often been subject to change and a system of evolving beliefs, beliefs that circle back to the Bible (hence, why this movement is called a”restoration”).

To place the Restoration in context, we have to remember that mainstream culture (Methodists, Baptists, etc.) already formed their own theology that combined mixed white supremacy with their own interpretation of a vague scripture to justify slavery. Thus, we have two competing interpretations of what the Bible says about the curse of Canaan, the servant of servants, and about slavery generally. This has been debated much by contemporaries and historians ever since.

This mainstream interpretation directly impacted the lives of enslaved peoples and their descendants in the Southern United States and enriched those who duped their fellowmen around them to support their “peculiar institution.”

Along come “the Mormons.” Joseph Smith had various reasons for why he and the saints settled in Missouri, reasons that are beyond the scope of this article, but as any student of history knows, Missouri by the 1830s had been at the forefront of the nation’s most heated political topic – slavery. The topic would inevitably try the Latter-day Saint and come to the attention of the prophet.

Joseph Smith demonstrated a better attitude towards blacks than many in his day, ordaining one to the church’s priesthood, commenting on their humanness when many others were using bogus science to justify their inhumane treatment. The prophet even threw his hat in the ring to run for the office of the President of the United States on an abolitionist platform. Shortly after announcing his intent to run for office, he was killed by a mob.

Among the prophet’s political platforms, he advocated the peaceful resettlement and purchase of slaves from their owners with the federal revenue made by homesteaders moving west. He also took Paul’s position to not preach to slaves without their master’s permission nor to stir them to anger against their masters.

Many others in U.S. history, like John Brown, took the extreme approach to violently free the slaves. The president of the United States, Abraham Lincoln, drafted hundreds of thousands into a war that brought slavery to an end.

Latter-day Saint theology on the subject of Ham and his lineage is recorded in the Book of Abraham, a small book that was revealed to him in 1835 a similar fashion to the Book of Mormon. This new revelation described the Biblical connection to the descendants of Ham being cursed only as it pertained to holding the priesthood.

In a letter that has likely seen little circulation from the Joseph Smith Papers, the prophet identifies Sub-Saharan Africans as being Ham’s lineage. In the Book of Psalms 105:23;27 associate this region as the “land of Ham.” This is not a new idea, as that is exactly what many of his Protestant contemporaries also asserted. Broken clocks are right twice a day. The distinction then is the interpretation and intent of the curse. Do we believe the young prophet or mainstream society?

The difference in theology is simple: in the Restoration, the priesthood was restricted according to lineage, mainstream Christians defended slavery by skin color. One was based on the notion God had something to say about lineage, curses, and who can or cannot have the priesthood, the latter was simply driven by hate and the desire to use others to enrich themselves.

The tale of these two completely different interpretations is more relevant to the criticism Latter-day Saints face today while most of Christianity in the U.S. has more or less been off the hook. However, Methodists did not apologize for slavery until the year 2000, and Baptists in 2009. The Latter-day Saints rescinded the restriction in 1978 via revelation and mandate from heaven.

Some have accused the Church of changing merely due to political pressure from the federal government, but the Church possessed its own timeline and reason for the change. I don’t think changes to the Constitution in regard to Southern segregation of water fountains, schools, and movie theaters demonstrated any kind of pressure towards a religious body in Utah, a religious body that has been accustomed to pursuing their own beliefs and going against the grain.

The Church leaders had often asked the Lord, long before the Civil Rights movement, if the time was right to end the restriction. They wanted to know! Long before the restoration began to make any significant strides in Africa after 1980, and coupled with their desire to end the restriction, they realized that many black brothers and sisters in Latin America were faithfully awaiting a time when they too could enjoy the blessings of the priesthood. Many “black” Fijians were given the priesthood long before 1978, indicating just another example of the emphasis on lineage and not skin tone.

Where does this leave the Restoration? While the Restoration included a restriction on the priesthood and temple ordinances until 1978, it must never be forgotten that this theology once ran contrary to the terrible justification of slavery of many mainstream Christians. One might even see Joseph Smith’s theology as a call to his contemporaries to end their abuse of the Bible and their fellow man.

While many Latter-day Saint leaders and authors over the course of the late nineteenth and the mid-twentieth century often combined the priesthood ban with various other doctrines in an attempt to offer some kind of explanation, the unfortunate fact is that their opinions have easily be seen as racially insensitive. Today, such comments and explanations are disavowed.

Slavery and Jim Crow were hateful, but the restriction on the priesthood is a completely different kind of thing motivated by entirely different reasons.

The single most important source to view the priesthood restriction lies in the Book of Abraham, chapter 1. All other explanations were unnecessary and have caused more trouble than Latter-day Saints that put into question the very truthfulness of this movement. The comments and justifications of mainstream Christianity, specifically in the South, were much more significant and impactful to the African American community than any denial of liberty critics might wish to lay at the feet of Latter-day Saints.

Comments in the Book of Mormon about dark skins and curses also have to be read in the correct context.

Slavery and Jim Crow were hateful, but the restriction on the priesthood is a completely different kind of thing motivated by entirely different reasons. The only exception is that yes, Brigham Young himself may or may not have had racism in his heart at times, yet he was human and we can find two biblical characters who also struggled with this sin. Even after witnessing the miracles of Christ, and after being commissioned to preach to all the world, Peter demonstrated prejudice against Gentiles. In the Old Testament, the prophet Jonah expressed a similar attitude towards the Ninevites. 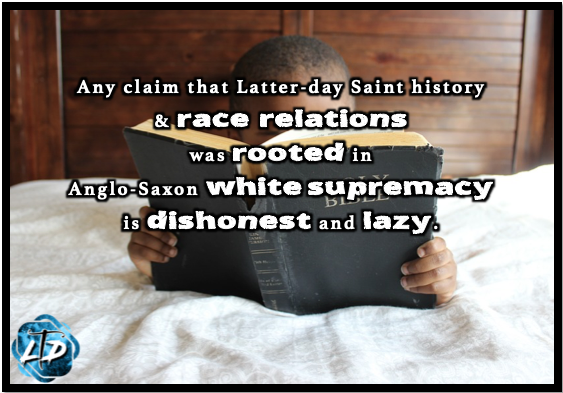