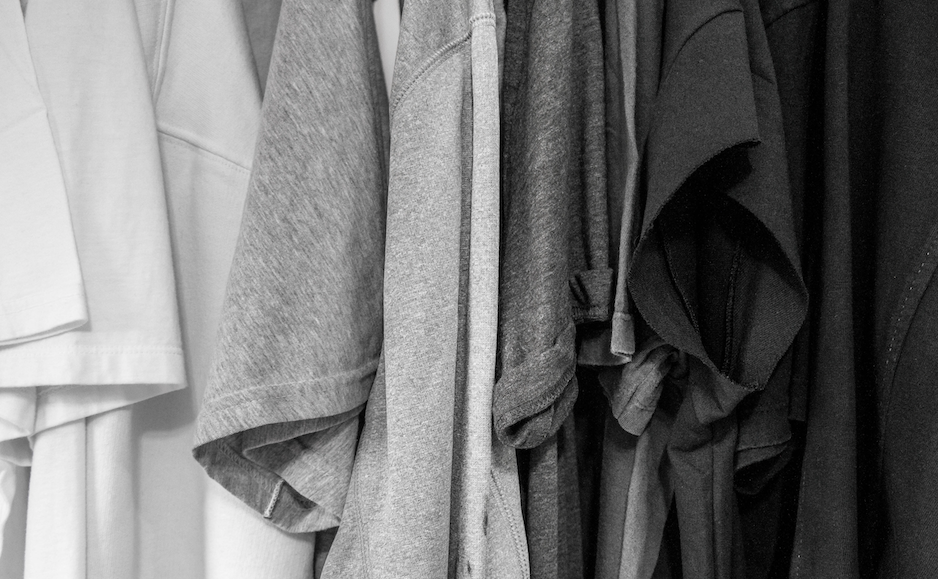 Can God Really Change One Race Into Another?

When historians for the Church of Jesus Christ of Latter-day Saints published their Race and Priesthood essay, they stated, “Today, the Church disavows the theories advanced in the past that black skin is a sign of divine disfavor or curse…Church leaders today unequivocally condemn all racism, past and present, in any form.”

One issue that many critics have with the Book of Mormon is that they interpret the text to mean that people with dark pigmentation are cursed. Except it does not say that at all. As I was lecturing to my students on the Second Great Awakening and we came to the section on “The Mormons,” I overheard one of my students echo this false and badly misinformed claim to his classmates. Of course, I did not address him then as I didn’t feel it would have been professional in that setting, but I address the topic now.

The Book of Mormon is a Hebrew record of Native American people who came from Jerusalem over 2,600 years ago and makes absolutely no comment of people from Africa (with the exception of Nephi’s family’s language being “reformed Egyptian”). The ancient text’s translation into English in the nineteenth century made it almost too easy for some readers to figure that its message meant one of pigmentation and completely missing its true meaning. This was not the message of the Book of Mormon prophets, not by a long shot.

Every once in awhile, information comes out that is game changing, yet it can go almost completely unnoticed by critics and believers alike. I promise after looking into the claims that I will comment on, you will never read the Book of Mormon the same again. Ethan Sproat, a PHD in English from Purdue University, wrote an excellent article entitled Skins as Garments in the Book of Mormon: A Textual Exegesis.

In essence, Sproat makes the case that “black skin(s)” and “white skin(s)” have nothing to do with “black” and “white” people as is typical in the American vernacular. Rather, the “skins” are in reference to the coats of animal skins or the garments worn as part of Hebrew-style worship (i.e. temple worship attire). This explanation debunks any theories or suggestions that the Book of Mormon is rooted in racism or is even the least bit interested in skin pigmentation.

I advise any interested reader to spend the time to look into the research and cross references, but I will summarize a few points below.

The strength of this author’s argument comes from the overall context where the troubling phrases are found. Any verse that mentions “skin of blackness” must be understood in what is being fully addressed by the scriptural author and not taken in isolation. There are only a handful of verses that make reference to white and black “skins,” and Sproat addresses each.

In 2 Nephi 5, we find the first mention of black skin. Nephi had just built a temple prior to his address to his people. Nephi discusses the condition of the rebellious Lamanites, their “skin of blackness,” and their associated curse. What follows is Nephi consecrating his brothers to be priests likening it to when Moses called priests and gave them “holy garments” (Lev. 16:32-33). Sproat continues,

Additionally, Jacob as a priest opens his comments with, “I might rid my garments of your sins, I come up into the temple this day.” The Lamanites, in their sin and rebellion, do not have access to the Nephite temples and associated covenants. Imagine the “white skins” of the Nephites representing their temple garments/covenants as outward symbols, and the “black skins” as the garments of the Lamanites (because they too believe in the Law of Moses and practiced their own faith).

Why, when we read about repenting and turning back to God, would that have anything to do with pigmentation? It doesn’t. The illustration should be on trading their dark garments with new white garments, signifying the end of the curse, and bringing them back into God’s presence. That is why we read comments like “their skins will become white like unto the Nephites” (3 Nephi 2:15). This is as simple as them changing their clothing and accepting the Nephite covenants with God, uniting and outwardly expressing their faith.

One of the most interesting comparisons Sproat points out is when the enemy of the Nephites, known as the Gadianton Robbers, wear “a lamb-skin about their loins, and they were dyed in blood” (3 Nephi 4:7). Similarly, in the King James Bible, we see Joab, nephew to King David, coming to war against Solomon’s army. This enemy to the covenant people “put the blood of war upon his girdle that was about his loins” (1 Kings 2:5, 28-34).

This is a remarkable intertextual consistency with the Book of Mormon’s companion, the Bible. It’s one thing to make claims that Joseph Smith plagiarized whole sections of Isaiah (what these critics fail to realize is that it is because the Nephite audience were READ the words of Isaiah and these were included), but it’s another thing to find such a small but significant comparative detail as this.

One point of clarification I find interesting is that these “marks,” which are placed upon those who were cursed or rebellious people, were intended to be a visual sign to the Nephites indicating who was and was not of God’s people. Further, it is often stated that God placed the mark upon them, but in reality, they actually marked themselves. (Picture the Lamanites wearing their own garments, as well as the Amlicites in Alma 3:18 who “knew not that they were fulfilling the words of God when they began to mark themselves in their foreheads.”)

“lies at the heart of the Lamanites’ curse (see 2 Nephi 5:16-21), and if separation from the Lord’s covenant people thus concerns authority-granting clothing (skins or garments or coats), then when the Lamanites unite themselves with the covenant people and gain access to the Nephite temple, it is presumably their clothing that is symbolically [or quite literally] made white.”

Just for the sake of providing a New Testament comparison to wearing skins, we read in Mark 1:6 about John the Baptist who wore a “girdle of a skin about his loins.”

Consequently, passages in the Book of Mormon that have traditionally appeared to lend themselves to racial interpretations need not be read that way. If the textual observations I have laid out in this article are sound, it may in fact be preferable to find in such passages rather different possibilities.

As with any new contribution to any larger conversation of textual interpretations, I look forward to seeing how those who adhere to previous interpretations might respond to the interpretive model I’ve articulated throughout this article. More to the point, those who want to claim that the Nephites are white and the Lamanites are black in a racial sense must especially justify their position through careful reanalysis of the relevant texts. Specifically, such critics will have to argue against the possibility or likelihood that the various-colored or cursed skins in the Book of Mormon are kinds of garments. Whatever the ultimate conclusions will be about skins in the Book of Mormon, I expect the interpretive model I offer here will bear serious engagement.

So, can God really change one race to another? Sure! I don’t doubt that He can or could, or would, but that is NOT what He did here. Hopefully, this helps to explain that the Book of Mormon is not rooted in racism, as critics have presumed, and while it does mention in 2 Nephi 26: 33 those that are “black and white,” presumably meaning non-covenant and covenant people, “…he inviteth them all to come unto him and partake of his goodness; and he denieth none that come unto him…and all are alike unto God…” 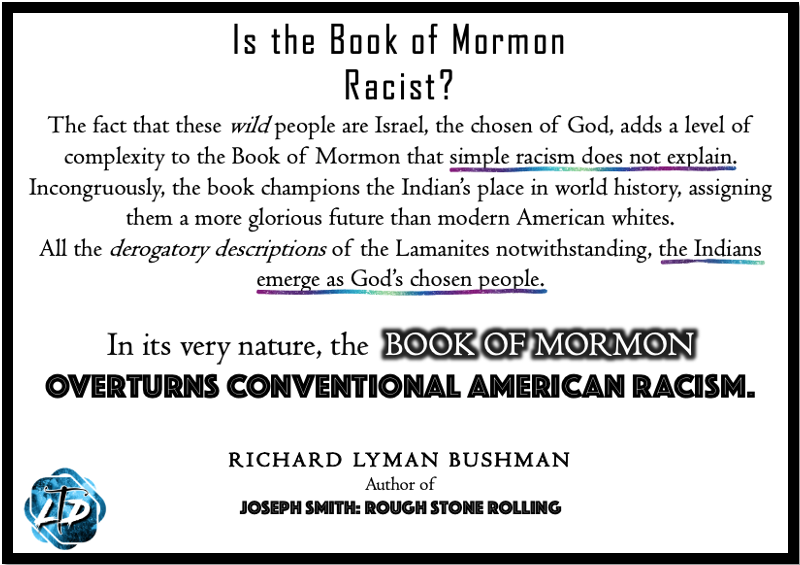 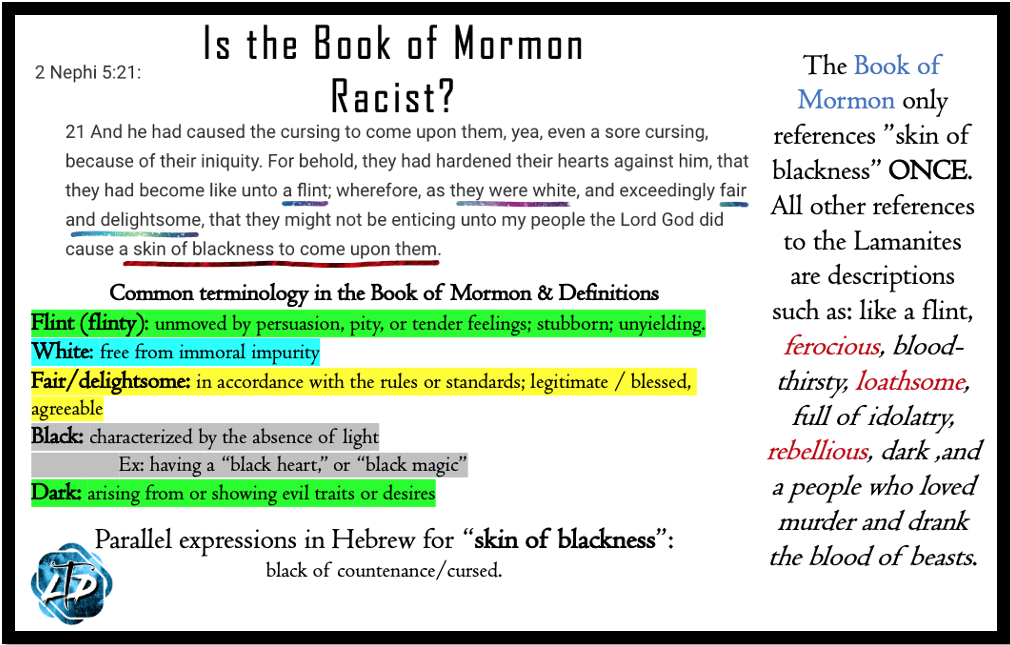