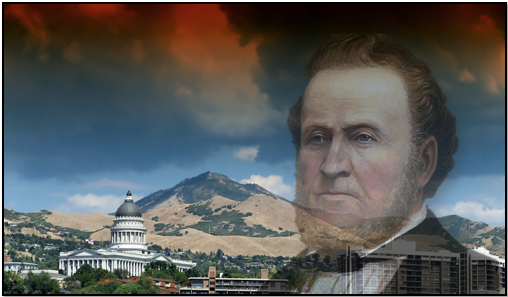 Why Did Brigham Young Regulate Slavery Instead of Abolish It in Utah?

This is part 9 of a 9-part series on the topic of the Church of Jesus Christ of Latter-day Saints and race relations. See the rest in the category section: https://www.latterdaytimes.com/category/blacks-priesthood/

Horace Greeley — What is the position of your Church with respect to Slavery?

Brigham Young — We consider it of Divine institution, and not to be abolished until the curse pronounced on Ham shall have been removed from his descendants.

H.G. — Are there any slaves now held in this Territory?

B.Y. — Those laws are printed — you can read them for yourself. If slaves are brought here by those who owned them in the States, we do not favor their escape from the service of those owners.[1]

At first glance, it would appear that Brigham Young was simply a man of his time, initiating slavery in Utah because either he was racist, like many of his time, or because he had some way of benefiting from it.

The most pressing question for Latter-day Saints, is how could a man who supported slavery legislation also be a prophet of God? The record is much more nuanced. First, you have to look at what life was like in Utah as the Saints arrived.

The History Channel provides context for this period, just a few years before the Civil War:

Mexican colonists in the area enslaved Native people and used their labor to work their lands and tend their children. Some groups of Native people, including the Utes, participated in the slave trade, raiding nearby tribes, capturing potential slaves and selling them to the Mexican elite.

Many Mormons believed slavery was immoral and opposed any kind of enslavement. But once they reached Utah’s Salt Lake Valley, they were initiated into the slave trade by a bloody incident that launched them, even if unintentionally, into the role of slave owners.

“Early one morning we were excited at hearing their shrill, blood-curdling war whoop,” wrote John R. Young, who was camped with the Mormons in what would become Salt Lake. The Native people they encountered had just returned from a raid in which they had captured two girls. “One of these they had killed, and were torturing the other,” wrote Young. One of the Mormon settlers intervened, buying the captive girl.

Soon, Mormons were buying slaves regularly in an attempt to save them from their enslavement and to convert them to Mormonism. “It is essentially purchasing them into freedom,” Brigham Young, the pioneers’ leader, wrote. He encouraged other Mormons to “buy up the Lamanite children as fast as they could and to educate them and teach them the gospel.”

This amounted to a green light for participating in the slave trade. In 1852, the Utah territorial legislature passed a law that allowed the trade, justifying it as a kind gesture toward children who would otherwise be degraded. As a result, Mormons were soon trading horses, food, and other items for Native children. Ute Indians, many of whom were starving, sold their children to Mormon people in order to ensure their survival.[2]

The interview with Greeley ended the topic of slavery with this final question on the topic:

H.G. — Am I to infer that Utah, if admitted as a member of the Federal Union, will be a Slave State?

B.Y. — No; she will be a Free State. Slavery here would prove useless and unprofitable. I regard it generally as a curse to the masters. I myself hire many laborers and pay them fair wages; I could not afford to own them. I can do better than subject myself to an obligation to feed and clothe their families, to provide and care for them, in sickness and health. Utah is not adapted to Slave Labor.[3]

This is an interesting admission from a supposed racist. First, he makes the point that slavery isn’t useful in Utah and that it is more of a curse to the masters. This casual attitude seems almost inhumane because if it was useful, you have to wonder to what degree Brigham Young would have allowed or supported slavery under this authority. However, even the topic of slavery as an economic system is not a monolith. In other words, slavery differed in brutality and justification from one region in the U.S. to another. The Bible presented regulations on slavery as seen in the following section, but pseudo-science and real racism made way for the brutality of slavery practiced in the South, a form of servitude that would be foreign to scripture.

Slavery and the Bible

Why did Brigham Young describe slavery to Greeley to be “of Divine institution?” That is a pretty damming statement to anyone who believes Brigham Young is a prophet, at least on the surface.

A video produced by The Beat, by Allen Parr explains slavery in the Bible. This understanding is essential to understanding how Brigham Young viewed slavery – to be distinguished from his Southern contemporaries more abusive system. The dead cannot speak for themselves, but the record of how Young viewed much of his life by the Bible is clear.

Summing up The Beat’s explanation in the video, here are the key takeaways:

-The Bible says God did not create slavery, but he gave Israel laws to regulate it.

-Slavery was designed to help the poor survive.

-Hebrew culture slavery was volitional – to hire yourself to someone to help meet basic needs. (Latter-day Saints see themselves as the modern-day House of Israel, preparing the earth for the Second Coming of Christ)

-The Biblical laws that regulate slavery are not a license for the degradation of people.[4]

I think the History Channel and The Beat would agree on the Utah Saint’s experience with slavery.

Church essay on Slavery and Abolition

An official source from the Church of Jesus Christ of Latter-day Saints describes slavery and abolition as it related to the church:

“In 1852, Church leaders serving in Utah’s legislature debated what to do about black slavery in Utah Territory. Brigham Young and Orson Spencer spoke in favor of legalizing and regulating slavery, allowing enslaved men and women to be brought to the territory but prohibiting the enslavement of their descendants and requiring their consent before any move. This approach would guarantee the eventual end of slavery in the territory. Apostle Orson Pratt gave an impassioned speech against any compromise with the practice of slavery: “[To] bind the African because he is different from us in color,” he said, “[is] enough to cause the angels in heaven to blush.” Young and Spencer’s position prevailed, and the legislature authorized a form of black slavery that demanded humane treatment and required access to education.

During the 1850s, there were about 100 black slaves in Utah. In 1861, the Civil War broke out in the United States over the question of slavery, as Joseph Smith had prophesied.”[5]

Orson Pratt specifically targeted the racist concept of enslaving blacks due to their skin color. It is not clear at this point that this concept was behind Brigham Young’s support of legislation to regulate slavery. However, we see the example from the History Channel that the Utah legislation went beyond conventional justifications for slavery in the nineteenth century. Slavery made technically legal could have included a clause that barred Southern slaveholding-converts from owning slaves, but as a principle and for reasons that will be repeated below, Brigham Young did not want to interfere in that matter.

Further, Brigham Young did not believe in the concept of white or black people, something science and the Smithsonian have begun to promote. Instead, modern advocates hope to change the conversation in terms of humanity all being varying shades of brown.[6]

Young made the Smithsonian’s point in this prophetic way over one-hundred years earlier:

“You talke of the dark skin, I never saw a white man on earth. I have seen persons whoes hair came pretty nigh being white, but to talk about white skins it is something intirely unknown, though some skins are fairer than others; look at the black eye and the jet black hair, we often see upon men and women who are called white, there is no such things as white folkes. We are the children of Adam, who receive the blessings, and that is enough for us if we are not quite white.”[7]

This is an interesting admission by someone who is supposed to be racist. Anyone who has read Brigham Young should be honest in their portrayal of the prophet. Young viewed everything in the vernacular of the Bible. “Blacks” or “Negroes” were not soulless subhumans, but children of Adam restricted from the priesthood not because of their skin color, but due to their family lineage. To throw around the term “racist” is to cheapen it. Real racism was more simple in its explanation and more violent. Real racism simply looked at the person’s skin tone and justified physical violence. While Brigham Young was quick to tie this lineage to a destiny of servitude, there was little he could have done about it. It was the reality of his day, and it sure looked like the curse in Genesis placed on Ham to be the “servant of servants” was being lived out in his day. These were unfortunate times for all parties involved. Violence was on every side, something Latter-day Saints were all too familiar with.

In “a series of violent civil confrontations in the United States between 1854 and 1861 which emerged from a political and ideological debate over the legality of slavery in the proposed state of Kansas” the conflict that became known as Bleeding Kansas.[8] Though this did not involve Latter-day Saints, this string of violence demonstrates the seriousness with which Saints could have potentially fostered a violent atmosphere in their new home in Utah had Brigham Young not followed the advice God gave on this issue in the Bible and made proper regulations at the time.

On violence against the Saints in Missouri and Illinois, the Church’s essay on Slavery and Abolition continued:

In 1832, Latter-day Saints who had settled in Missouri were attacked by their neighbors, who accused them of “tampering with our slaves, and endeavoring to sow dissentions and raise seditions amongst them.”[9]

The Civil War more or less settled the matter just a few years later, especially as far as conflicts in the western states with their significantly lower population of blacks.

-Brigham Young viewed his role and slavery in terms of the Bible.

-The brutal form of slavery practiced in the Utah territory was soon answered by a more humane involvement when the Saints arrived.

-Brigham Young did not interfere with converts to the Church who came from the east with their slaves, but laws he supported prevailed that ensured a more biblical regulation and guaranteeing an eventual end of slavery in Utah.

-Utah was to be a free state under Young if admitted into the Union.

-Slavery, as defined by the Bible (and which informed Brigham Young’s views), should not be confused with the brutal system of slavery in the South.

[4] Does the Bible Support Slavery? The Beat by Allen Parr. https://www.youtube.com/watch?v=u_sCQ_oW1pw&t=16s

[9] Slavery and Abolition. The Church of Jesus Christ of Latter-day Saints.