The Kingdom of God is a fixed entity with eternal principles.  God doesn’t ask you to gather and seek to democratically change or alters His plan – His goal is to remain consistent in order to transform you.

It only takes a few minutes scrolling through your Facebook newsfeed to feel overloaded with information filled with emotional responses and a sense of deep division and pain.  After seeing way too many posts about a few different topics, I felt compelled to share some thoughts for my own peace of mind.

There are three specific topics that all seemed to dominate my newsfeed on a single day. One of them was gay marriage, the other on the movement to Ordain women to the priesthood, and last which was less significant but equally perplexing, was the personal crusade of a young lady who seeks to provoke Brigham Young University to have their standards changed and lowered in regards to morality.

A very sensitive subject for many, the political controversy over gay marriage rages on in this country between the religious right and the Democratic Party, who works alongside the lesbian, gay, bisexual, and transgender (LBGT) communities.  On the right, they wish to protect marriage with the use of force through the federal government wrapped in the light of the Gospel’s condemnation of homosexuality, a mode of coercion that Christ himself never advocated in his persuasive earthly ministry.  On the left, they too seek to have their agenda forced upon the people, though they wrap their intent in the cloth of tolerance and equality. Those in the middle argue, live and let live.

Are too many observers taking mental shortcuts to form their opinions on this matter?

Reporting with Deseret News, Tad Walch sums up the conclusions of Ty Mansfield, the president of North Star (a support group that helps faithful Latter-day Saints with same-sex attraction maintain a positive relationship with their faith) who presented his findings at the recent FAIRMormon conference on same-sex attraction. In this article, Mansfield’s speaks to the mental gymnastics that the gay marriage debate fosters as reported by Walch:

Mansfield referred to research by Lisa Diamond at the University of Utah that found sexual fluidity, what we find attractive, is a general feature of human sexuality. Her research, he said, also reminds us that heterosexuals don’t find all people of the opposite sex attractive. Neither do those with same-sex attraction find everyone of their gender to be attractive.

Keeping such nuances in mind helps avoid mental shortcuts that can lead to bias, he said.

Mansfield cheered recent changes in LDS culture that have brought more compassion to same-sex attraction dialogue and “a clarifying and nuancing of church teachings.”

But he rejected the cessation of polygamy and the revelation giving the priesthood to men of all races as possible metaphors for “further evolution on homosexuality in the church.”

One might add, that evolution in the church towards ordaining women to the priesthood, or Brigham Young University (BYU) changing their university policy on chastity at the bidding of the jaded experience of one young lady, are also not in the cards.  Such crusades are dishonest and misguided, directed by those with legitimate complaints and who seek to extend their agenda into the political arena of the church, only to set themselves up for disappointment.  Luckily, there are still some institutions and gathering places that are grounded in eternal principles and independent of the whims of political opportunists.  Or is there?

I wrote ‘Day of Defense‘ because Church development already faces challenges with nonmembers who think Latter-day Saints are not Christian, or that we work for our salvation, can someday own our own planet, or that we still practice polygamy and many more.  There is a lot of energy out there pushing for change and trying to correct one grievance or another, but I challenge us to as members, to fix the already existing grievances many millions of Evangelical, Protestant, Catholic, and other mainstream Christians have towards the Restored Gospel.  You can begin this conversation with a reading of ‘Day of Defense’ and join me at https://www.facebook.com/LatterDayTimes/ or here at latterdaytimes.com.

“Wherefore, brethren, seek not to counsel the Lord, but to take counsel from his hand. For behold, ye yourselves know that he counseleth in wisdom, and in justice, and in great mercy, over all his works.” – Jacob 4:10, the Book of Mormon 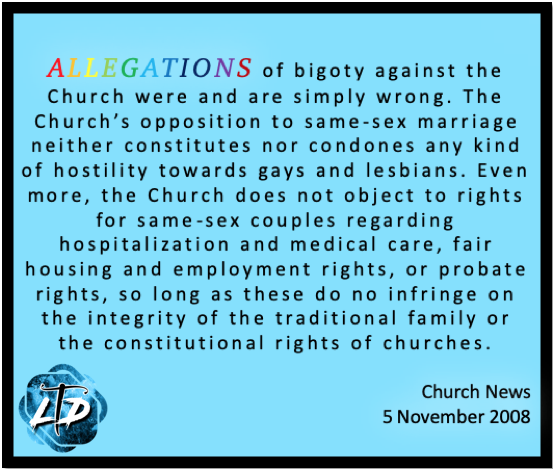